C.W. Reed3 years ago
5 Stars for this "Cat"! Thank You Andreas! Cheers!!
Report 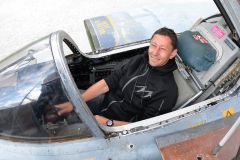 Tim Segulin3 years ago
Great angle and interesting comparison to similar angle for the Dornier 24 - two classic seaplanes from the 1930s. I always loved the Catalina - she was such a pretty plane and as a kid I imagined my self reclining inside one of those glazed fueslage sponsons casually watching the world go by...
Report 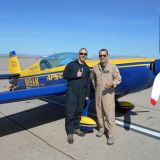 wylann3 years ago
Beautiful shot of one of my favorite aircraft of all time.
Report

Dennis Bishop3 years ago
Look at ALL that wing!
Report

Jerry Thornton, Sr.3 years ago
The photo of the "P Boat" brings back memories from the late '40s @ NAS Seattle.


As an Airman Aprrentice w/ VF 894, several of us were given the afternoon off to visit the tower & see if we could arrange to take a hop w/ one of the a/c that may be flying that day.


Our first attempt ended up as a "gotcha', the 3 pilots we approached directed us to the Parachute Loft to check out saddles! They were single seat F4F or F4U pilots & had some fun w/ us!


The next group we approached agreed that we could go along on their PBY hop. We were directed to the waist gun blisters which were rolled open duringthe entire flight!

NAS Seattle was situated on the shores of Lake Washington & following take off, they conducted a series of water landings. A crewman came aft w/ a flashlight checking the bilges after each increasingly harder landing. "Checking for leaks/cracks in the hull" was his response!


During the two hour flight we experienced a number of stall manuevers accompanied by shuddering & claxon sounds.


At no time did we sit or belt ourselves in. We thought our "hosts" were simply "wringing us out" until we landed & exited through a blister...
we were greeted by a cadre of officers questioning us about why & how we'd STOWED AWAY on that restricted inspection flight!!


Fortunately, the flight crew came to our rescue & we tthanked the pilots for a great inaugural flight.


Seventy years later, during one of our VP 69 Reunions @ NAS Whidbey, I discovered that there is a PBY Museum in Oak Harbor. I have been a member for the past several years.


Thanks so much for including the "Catalina" photo in this issue!

Andreas StöcklPhoto Uploader3 years ago
Thanks for all your interesting comments!
Report