Gary SchenauerPhoto Uploader3 वर्ष पहले
Hopefully, one of these can be restored by the dedicated folks at Aviation Classics.
Report

C.W. Reed3 वर्ष पहले
These would be cool to see flying! Always thought these looked like an F-100 combined with an F-105! Great 5 star shot Gary! Thank You!!
Report

Tom Vance3 वर्ष पहले
When I was a kid growing up I never thought I'd see these in the USA - let alone be able to get this close for photos! With only 2 stars showing, these are 5***** fer sure!
Report 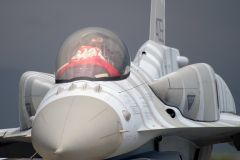 Runway24063 वर्ष पहले
Can I ask when this photo was taken? The reason being that neither N210EM or N211EM are current registrations, these aircraft were re-registered N221UM and N21UT respectively in January 2019. In case you weren't aware both these aircraft previously flew with the Polish Air Force [You can see part of the Polish marks on the nearest MiG-21 under the Soviet star.
Report

Gary SchenauerPhoto Uploader3 वर्ष पहले
Five months ago (Oct 23, 2018). Yep, I knew the regs listed here were no longer valid ... I rechecked both of them a day before I posted this pic. However, since the reg numbers are visible in this pic, and because both regs were valid to Aviation Classics at the time the photo was clicked (and also because, thru several previous experiences, I am aware of what would have happened if I had posted reg numbers different from the ones plainly visible on the MiGs), I entered the N2xxEM numbers even tho they were no longer current. Based on my past experiences, if I had posted the current regs, there is a high probability that one or more of the following Comments would have appeared:
1) Are you aware that the reg number(s) you posted does/do not match the reg number(s) that is/are plainly visible on the MiGs?
and/or 2) The reg number(s) that are visible on the aircraft are the reg numbers you should enter.
and/or 3) The reg number(s) that were valid when you took the picture are the numbers you should use.
and/or 4) What is wrong with your eyesight? Can't you read the reg numbers that are clearly visible on your own photo?
and/or 5) If the regs that can be seen in the picture are now expired, you should not post the picture since it is no longer any good.
(Big Grin)
In regards to the previous history of these as indicated by the marks, I had not known that, and I very much appreciate the added info. I am always interested in knowing more about the history of military warbirds. TYVM, Runway.
Report

N210EM built May 1980 and delivered to the Polish Air Force. Served with the 9.PLM at Zegrze Pomorskie, then 2.PLM at Szczecin-Goleniow and finally with the 1.PLM at Minsk-Mazowiecki before being withdrawn in late 1992.

N211EM built January 1974 delivered to the Czech Air Force and served with the 4th Fighter Air regiment, then the 8th Fighter Air Regiment before ending it's service with the 82nd Fighter Squadron at Ostrava where it was withdrawn in 1993.
Report